How many teams have adopted SCRUM ?

Posted on September 26, 2014 by derkjandegrood

I have had discussion on how much of the teams are actually doing SCRUM. I think many organizations do SCRUM, since in a big organization there is always at least one team who does SCRUM. But that does not mean that other teams are not doing traditional development. Still there might be teams that say they do SCRUM but only use a board, and not the principles and mindset. 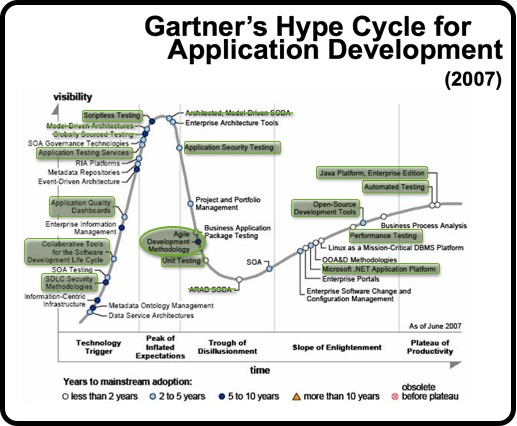 The Gartner hype curve from 2007 predicts that Agile will be mainstream adopted between 2012 and 2017.  So now is a good moment to asses where we stand with SCRUM adoption.

From my experience I’d say that the majority of teams are still not developing according to SCRUM. So I’d guess that 30-40% of the teams are using SCRUM, and 60-70% might have some knowledge but do not practice it.

But although I meet a lot of people from many companies, my reference is of course limited. What do you think?

Do I hit to high or to low?  Please, give me your opinion.

You can post your answer below in this blog. Or you can go to the discussion on the testhuddle.

Derk-Jan de Grood, works for Squerist as senior test consultant and agile advisor. As Trainer, Consultant and Agile Coach, he is involved with improvements and agile implementations. Derk-Jan is the author of several successful books including TestGoal, Grip on IT and the Dutch Testers association’s jubilee book on future trends in testing. In 2016 he published “Agile in the Real World”, a book on SCRUM. Derk-Jan won several awards including the prestigious European Testing Excellence Award in 2014
View all posts by derkjandegrood →
This entry was posted in Agile and tagged AGILE, EuroSTAR, Hype, question, SCRUM, test huddle. Bookmark the permalink.

2 Responses to How many teams have adopted SCRUM ?