Posted on January 20, 2015 by derkjandegrood 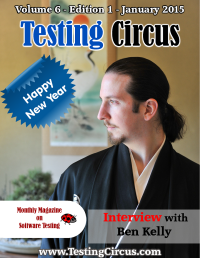 Testing Circus is a free to download monthly International Software Testing Magazine. The magazine is subscribed by thousands of software testers worldwide. The January Issue has just been released.

It contains many cool articles, among which my description of the SCRUM Battle.  The SCRUM battle is an ideal way to introduce the SCRUM way of working in an engaging way. The SCRUM battle is a simulation game in which 2-4 teams experience how to work in an Agile team. It has been designed to introduce SCRUM to stakeholders from e.g. the business, operational, management or Sales. But is also helps developers and testers to get a good feel about SCRUM.

Derk-Jan de Grood, works for Squerist as senior test consultant and agile advisor. As Trainer, Consultant and Agile Coach, he is involved with improvements and agile implementations. Derk-Jan is the author of several successful books including TestGoal, Grip on IT and the Dutch Testers association’s jubilee book on future trends in testing. In 2016 he published “Agile in the Real World”, a book on SCRUM. Derk-Jan won several awards including the prestigious European Testing Excellence Award in 2014
View all posts by derkjandegrood →
This entry was posted in Agile, Training and tagged AGILE, Game simulation, Introducing Agile, SCRUM, SCRUM battle, Serious Gaming, Testing Circus, Valori. Bookmark the permalink.